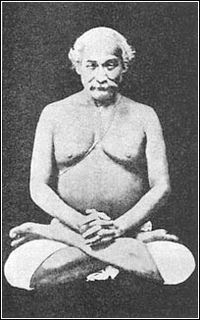 Near to publication of the book Yoga from authentic Indian tradition, I've the pleasure to give some glimpses of the third chapter where lives of great yogis have been presented. Today we introduce Lahiri Mahasaya.

Shyama Charan Lahiri (September 30, 1828 – September 26, 1895), better known as Lahiri Mahasaya, revived the yogic science of Kriya Yoga from the teachings he received by Mahavatar Babaji in 1861. As we wrote in former chapter, Lahiri Mahasaya has been the guru of Sri Yukteswar Giri and the “paramguru” of Paramahansa Yogananda.
The spiritual and honorific title Mahasaya can be translated, from Sanskrit, as “large-mind”.
Lahiri Mahasaya has been an unusual Indian holy man. He didn’t renounce the world, living (in Varanasi) as a married householder and working as an accountant for the Military Engineering Department of the British Indian government.
He became well known in the West through Yogananda’s Autobiography of a Yogi.
In 1861,in Varanasi, he began initiating sincere seekers into the path of Kriya Yoga. Over time, more and more people flocked to receive the teachings of Kriya from him.
He organized many study groups and gave regular discourses about Bhagavad Gita during his “Gita Assemblies”.
He maintained his dual role of accountant/householder and teacher of Kriya Yoga till 1886, when he retired.
Some of his notable disciples have been: Sri Panchanon Bhattacharya, Swami Sri Yukteswar Giri, Swami Pranabananda, Swami Keshabananda, Sri Bhupendranath Sanyal, Swami Vhaskarananda Saraswati of Benares, Balananda Brahmachari of Deogarh, Maharaja Iswari Narayan Sinha Bahadur of Benares and his son.
Regarding Kriya Yoga, he told:
“Prepare yourself for the coming astral journey of death by daily riding in the balloon of God-perception. […] Cease being a prisoner of the body; using the secret key of Kriya, learn to escape into Spirit”.
Posted by Manuel Olivares at 18:04